On any night in Austin, downtown is an energetic scene full of music, alcohol and the weirdest of talents, but the Live Music Capital of the World could lose some of its live performances because buskers, or street performers, are being forced off their stage.

A task force created by the Austin Music commission is reviewing solicitation and sidewalk safety ordinances to address complaints by the busking community. During the April 7 meeting, buskers said local law enforcement regularly tickets them for solicitation to keep them from performing. The unclear language of these laws relating to busking were previously put before the commission but were left unresolved. Street performers and enthusiasts have now organized into a group called the Austin Busker Project to fight for the rights of buskers in the city. The task force will draft recommendations for changes of the law to send to city council.

One of the buskers at the meeting, Lindsey Lindberg, said she is one of only two performing strong women in the world. As Mama Lou, American Strongwoman, Lindberg entertains audiences around the globe by performing feats of strength, such as crushing an apple with her biceps and ripping phone books in half.

Mama Lou, American Strong Woman tests the strength of her chain with the help of two young volunteers. Lindsey Lindberg is a member of the Austin Busker Project, a group whose goal is to promote street performance art in the city.

Richard Garza, a member of the Austin Music Commission, said busking is not illegal, but it does “falls under the panhandling ordinance because money is being solicited.”

The Austin panhandling ordinance states, “a person may not place a container on the sidewalk adjoining a business, residence, or other premises within the person’s control.”

Jennifer Houlihan, executive director of Austin Music People, a coalition of musicians, business owners and locals, said that since 2008 the Austin Police Department and city council have ruled that as long as donations are voluntarily given without verbal or written request from performers, it is legal.

However, buskers continue to get citations.

Lindberg said the confusion about the ordinance and busking was presented to the city council in 2011, and then pushed to the commission for review. Members of the newly formed Austin Busker Project came to the commission with a list of recommendations but nothing was done.

“They have just been stalling and do not want to create rules because they want to control who they want on the street,” Lindberg said, “Some artist are less hassled than others and they are picking and choosing who gets First Amendment rights.”

APD Senior Officer Joshua Visi said giving out a citation to buskers for panhandling and solicitation is not common. He said the problem with street performers is when equipment is taking up the sidewalk and pedestrians are forced to walk on the edge of roads.

“It becomes an issue of safety then, and most of the buskers move when asked and find somewhere else to play,” Visi said. “Most of the time they are not a problem and I enjoy the music and shows.” 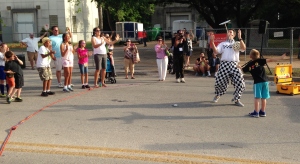 Dave Aiken also known as Checkerboard Guy entertains the crowd with his comedic juggling and antics as he teaches 8-year-old Rogen Henderson to balance a plate on a stick. Aiken is performing alongside buskers Bobby Maverick and Mama Lou at the Art City Austin Festival on April 12.

Houlihan said she wants city officials to create clear rules on busking and view the revision as
an opportunity to increase tourism. She said busking offers another viable income stream for artists who will continue to make Austin unique.

Garza said the taskforce is charged with looking at other cities such as Seattle and Spokane, Wash., Key West, Fla. and Chicago todevelop a similar plan to deal with busking.

Bobby Maverick is a magician hailing from New Orleans. Maverick is also a comedian who keeps the crowd laughing as he does his magic tricks. At the beginning of the show he sets up his plan to make money disappear and then reappear where one would least expect it.

Lindberg said she discourages other buskers to come to her hometown of Austin because the craft is not supported enough.

“It’s a great place if you want to eat tacos, but don’t come here if you expect to make money,” Lindberg said.