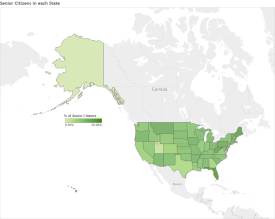 Find out the percentage and number of senior citizens in each state by clicking on the map.

Senior citizens are pulling their roots and moving to silver communities in the south.

Using U.S. Census data from the 2013 American Community Survey, we found that the 65 and above age group, or senior citizens, are 13 percent of the U.S. population. These 44,663,990 Americans live across the country but have a fondness for the warm weather of the Sunbelt; over 26 percent of seniors live in this section of the U.S. stretching from Southern California to South Carolina.

One such senior is 66-year-old Dennis Wilson. In 2010 Wilson moved with his wife to Sun City, a Central Texas retirement community in Georgetown, Texas targeting active or recently retired seniors. They left Seattle and the Pacific Northwest for many reasons, including the weather.

However, for him and many other seniors, it is not just how the natural environment felt, it’s their relationship with the people that helped them make the decision to move.

Living in retirement communities that populate the south and southwest has become increasingly popular. The social lifestyle it provides slows the rate of memory decline, according to a study by Harvard School of Public Health.

“Your neighbors become your best friend and everyone kind of looks out for everybody,” Wilson said.

The growth of the senior citizen population is not limited to retirement communities in Central Texas. Dallas and Houston have also seen an increase along with their overall population growth. Senior Citizens are 11.2 percent of Texans and the number is expected to rise. A recent Forbes Magazine article ranks several Texas cities among U.S. cities “going gray the fastest.“

Sun City resident Jan Crutchfield said returning to the Lonestar State was easy. Originally from Temple, Texas, she left Chicago for retirement in 2009.

“Not only did I get rid of the snow shovel, but with friends and family nearby, my move was sort of like coming back home,” Crutchfield said.

The percentage of senior citizens in Texas counties vary. Click to see which areas they fill up the most.

Analyzing the Texas senior population by county, Llano, Sabine, Menard and Motley counties have the highest percentage, all over 28 percent. Llano county consists of 32.9 percent of seniors. Dallas County has 9.3 percent seniors and Harris County’s senior population, including Houston, is 8.7 percent.

Just north of Austin, Sun City helps Georgetown’s growth rival the Texas state capitol’s. Georgetown’s senior citizens are 26.6 percent of its total population, many living in the Sun City community. The senior population in the Austin area has seen a steady increase since 2005 (line graph), going from 6.6 percent to 7.6 in 2013. In the same time period, its millennial population percentage wavered in 2008, while the city population continued to increase. 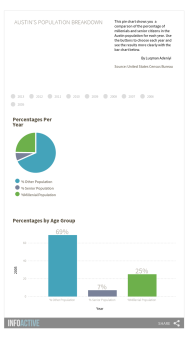 See how Austin’s population changed over the years by clicking on this interactive.

John Copeland, a Sun City resident who moved from rural Arkansas, echoed a feeling similar to many of his neighbors. They said their attraction to homes near larger cities, such as Austin, is because of the access to a large healthcare system in case of emergencies.

“I really wanted to be closer to a major metropolis where if something happened and I wouldn’t make it, my wife would not be alone,” Copeland said.

City of Austin Demographer, Ryan Robinson said the trend of seniors is to “pile into developments,” and take over pockets of the city, such as the Woodbridge neighborhood near 35th St. and Pecos St.

Even though several senior citizens say they prefer older neighbors, the proximity to younger people at Georgetown University and The University of Texas at Austin, as well as, families in surrounding suburbs like Round Rock, Texas, makes Sun City’s location ideal

“I do get tired of seeing old faces all the time,” Copeland said.

Wilson said a mix of ages and life experiences is something he searched for, too.

“It’s great to see both sides,” Wilson said. “You get to appreciate the fact that you are getting older and see other people ahead of you, so you are not afraid of what that means.”

Even though Wilson said he enjoys all the activities Sun City and the Central Texas area provides, “when 9 o’clock rolls around you kind of want to think about slowing down and going to sleep.”